The signing and launching ceremony of Zhongzhi IPO was held grandly

On October 8, 2021, the signing and launching ceremony of IPO counseling and listing of Guangdong Zhongzhi Testing Instruments Co., Ltd. (hereinafter referred to as Zhongzhi) was grandly held. 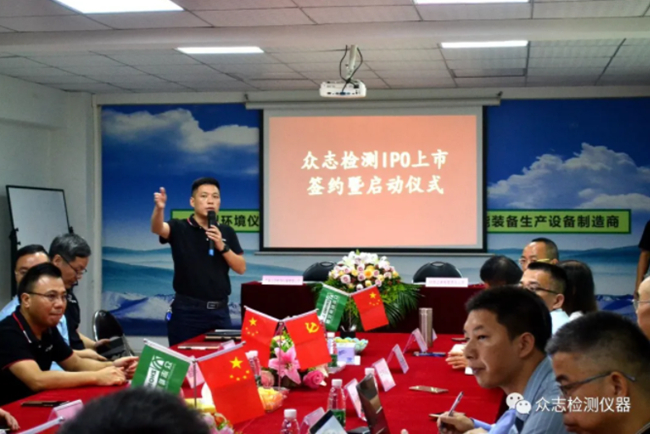 At the launch meeting, Zhongzhi signed a formal cooperation agreement with Caixin securities, Hunan Qiyuan law firm and Pengsheng certified public accountants, marking the official launch of the IPO of Zhongzhi. Zhongzhi will usher in a new development journey and open a new era for Zhongzhi people. 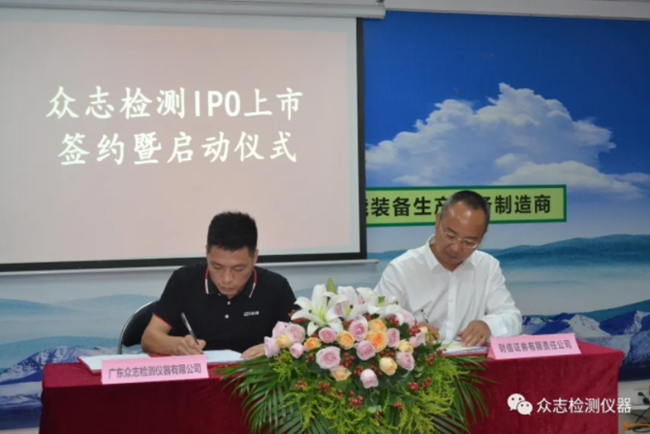 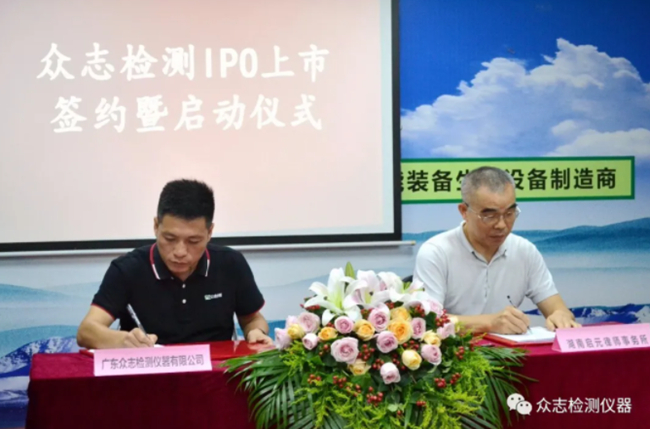 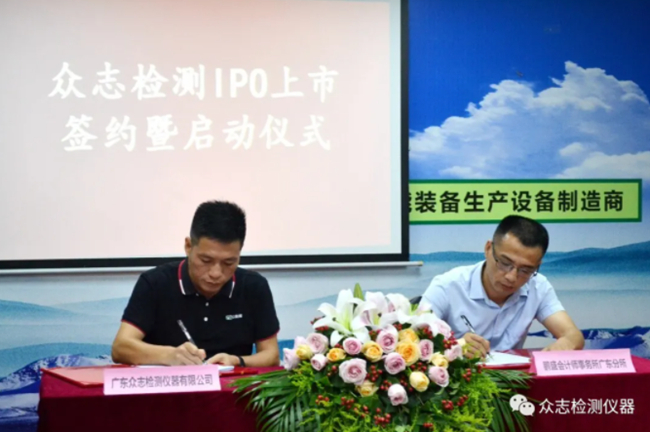 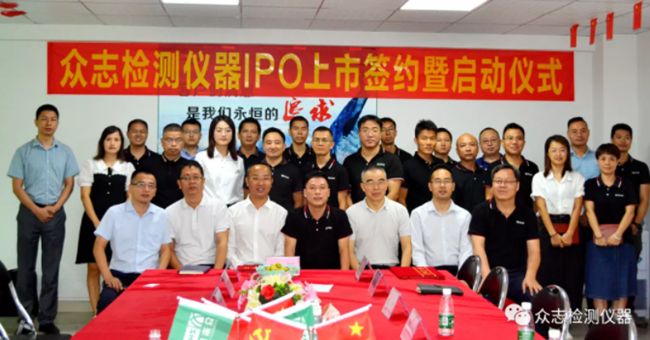 Founded in 2005, Zhongzhi is a national high-tech enterprise and CMC instrument metrology certification enterprise integrating R & D, production, sales and service of environmental and reliability test equipment. The company has passed ISO9001-2015 international quality system certification. With its leading technology, excellent quality and rapid technical response and delivery ability, it is regarded as the fastest growing enterprise in the industry ,one of the most creative enterprises.

In the past two decades of development, Zhongzhi has successively won the titles of the governing unit of Guangdong Instrument and Meter Association, the governing unit of Dongguan Metrology Association and the top ten excellent suppliers of environmental technology. Based on the Pearl River Delta and competing for the world, Zhongzhi products are widely used in various industries, such as new energy, automobile, aerospace military industry, semiconductor chip, 5g communication, photoelectric products and third-party quality inspection institutions Scientific research laboratories in key colleges and universities can provide customers with overall solutions of environmental and reliability test equipment and integrated testing services. 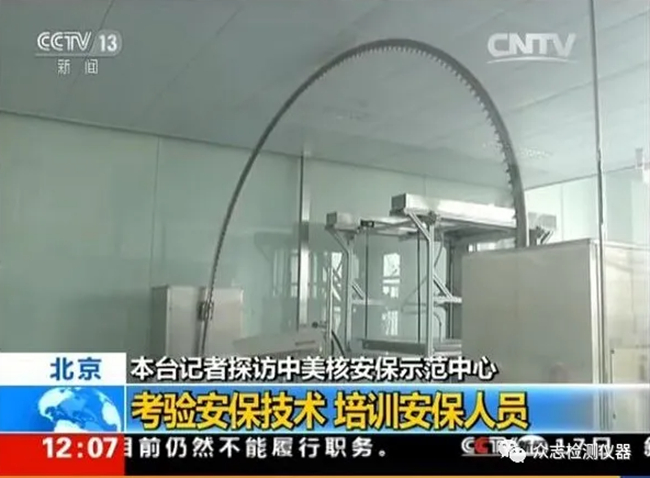 With the trend of global competition, Zhongzhi faces challenges and opportunities, takes the road of innovative and international development, and has 150 + stable customer groups, nearly 30000 + cooperative customers, six manufacturing bases and a strategic R & D center in more than 40 countries and regions around the world. At present, the strategic R & D center located in Dongguan, a famous manufacturing city in the world, focuses on the digital transformation and intelligent manufacturing of environmental and reliability test equipment, actively explores a new development mode of testing equipment industry and occupies a new highland of testing equipment industry manufacturing. Service support centers are set up in Tianjin, Ningde, Xiamen, Suzhou, Xi'an, Fuzhou and other cities to ensure that most cities in China will be present within 24 hours to respond to customers' after-sales service needs

Today's China is working hard, from "two bombs and one satellite" to Shenzhou flying into the sky; From manned spaceflight to "celestial eye" sounding; From Mozi to Beidou; From exploring the moon "Chang'e" to entering the sea "Jiaolong" China's scientific and technological development has made great achievements that have attracted worldwide attention, but instrumentation, as the most important part of the manufacturing industry, is still the weakness of China's manufacturing industry. It has seriously hindered the realization of the dream of becoming a powerful country for the great rejuvenation of the Chinese nation.

However, domestic enterprises started relatively late and lagged behind overseas giants in talent reserve, R & D investment and brand construction. 70% of the global market share was monopolized by foreign giants. China also faced the embarrassing situation of getting stuck at any time. Especially with the intensification of Sino US trade friction, China's instrument safety has been put on the agenda. It has become the consensus of the government, the market and the public to clearly emphasize the localization of instruments and support the development of domestic instruments in the 14th five year plan.

Since 2021, 14 provinces and cities have successively issued new government centralized procurement catalogues and policy standards, clarifying that government procurement should follow the principle of domestic priority. Among them, Zhejiang, Sichuan, Shaanxi and other five provinces and cities have strengthened the management of imported products and increased support for domestic instruments in the new deal.

As one of the many representatives of domestic instrument enterprises, Zhongzhi testing is honored to witness this moment. Since its establishment, Zhongzhi testing has adhered to the development route of "independent control and independent research and development", paid attention to research and development and technological innovation, and has nearly 50 patented technologies in the field of environmental and reliability test equipment, driving the development of the enterprise with technology, Help the realization of the Chinese dream of the great rejuvenation of the Chinese nation with technology!

Taking the opportunity of IPO guidance and listing, Zhongzhi detection will continue to increase the R & D and manufacturing upgrading of technology, and will realize the technological leadership of some products relative to overseas leaders. On the other hand, it will create differentiated competitive advantages through product customization, automation and intelligence.

Only by taking dreams as horses can we achieve success

Build a dream of the future before you can expect the future!

The water flows deep, and the line does not stop. Zhongzhi will has soared and changed magnificently!

Previous: In 2025, the market capacity of environmental and reliability test services will exceed 30 billion yuan

Zhongzhi Group (referred to as Guangdong Zhongzhi Test Instruments Co.,Ltd) was established in 2005, which is a leading analog environment and reliability test equipment overall solution provider.